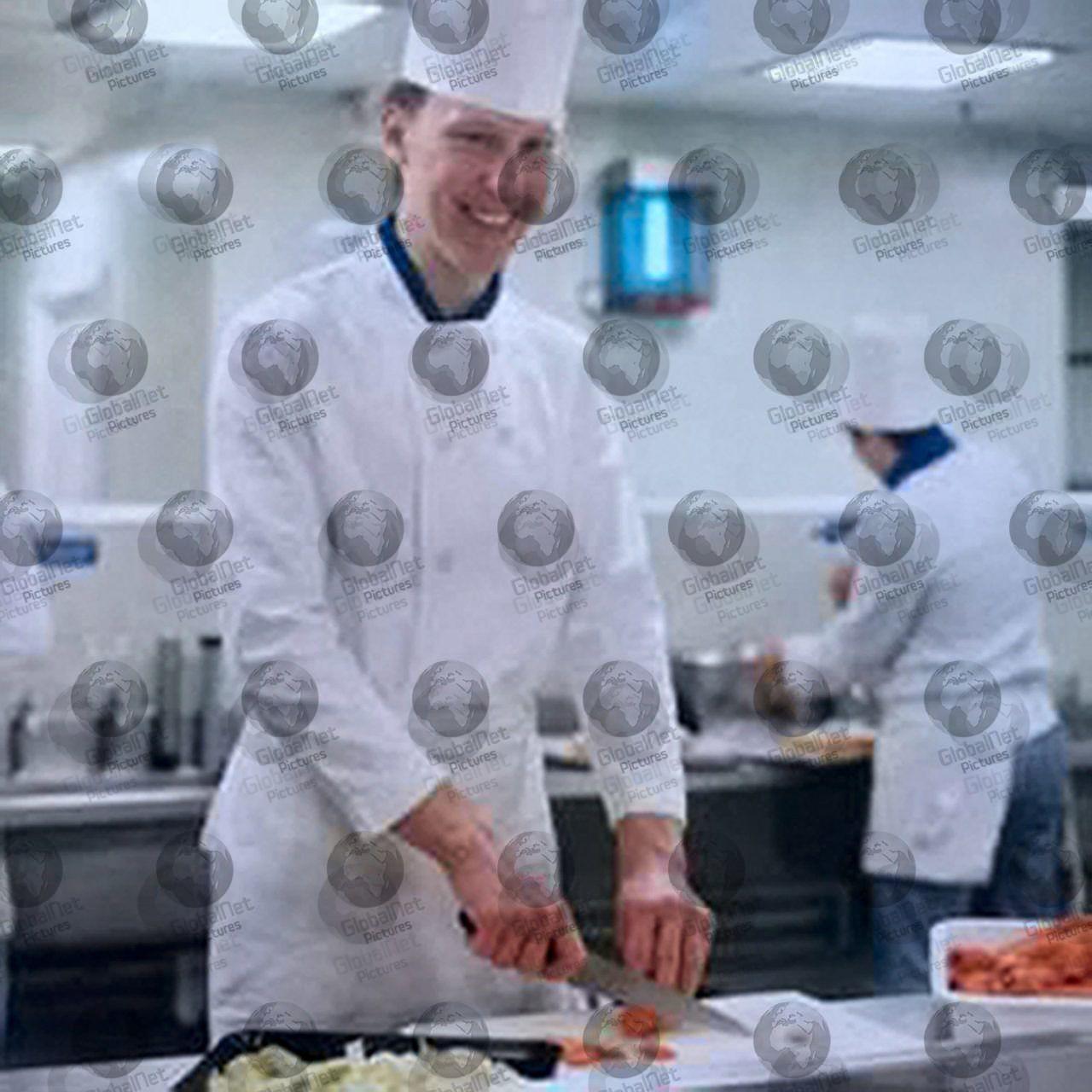 Serial killer Stephen John Port, 41, was a Masterchef cook and special needs teacher from Barking, east London, who jailed for the rest of his life on November 25 2016 at the Old Bailey for murdering at least four men in England by poisoning them over a 15 month period, drugging them, rape and sexual assault.

The victims, all in their early twenties, were given a lethal GHB drugs overdose.

Three of the bodies were found near the churchyard of Barking’s St Margaret’s Church or the nearby Abbey Ruins. Another victim was found in the street where Port lived, Cooke Street, Barking.

He was shown in an episode of the BBC1 show grinning at the camera wearing a toupee and chef’s whites while working at West Ham’s bus garage in 2014 alongside the celebrities.

Port helped the celebrity chefs make pasta and meatballs for more than 100 hungry bus drivers in an episode broadcast in June of that year.

He received a life sentence with a while life order, meaning he will not become eligible for parole and is unlikely to ever be released from prison. Police announced after his trial they had begun investigating at least 58 deaths connected to the use of gamma-hydroxybutyric acid (GHB) in response to his case.

Port was born in Southend-on-sea. When he was a year old, he moved to Dagenham, where he grew up and where his parents still live. He was described as being a ‘loner’ at school. His neighbour described him as having a peculiar, childlike personality, exhibiting odd behaviour as a grown man, such as playing with children’s toys. He came out as gay in the mid-2000s. He lived alone in a flat in Barking, London, and worked as a chef at a Stagecoach bus depot in West Ham.

Port met his victims via online gay social networks. He used (GHB), a date rape drug, adding it to drinks given to his victims, raped them, and murdered four of them in his flat in Barking. The prosecution said “postmortem examinations on the four young men who died revealed that each had died from a drug overdose featuring high levels of GHB”, but Port surreptitiously used other drugs on his victims: amyl nitrite (poppers), Viagra, mephedrone and methamphetamine (crystal meth). 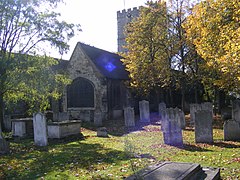 The graveyard of St Margaret’s Church, Barking: The bodies of three of the four murder victims were found here.

His first murder victim, Anthony Walgate, 23, a fashion student originally from Hull, who on occasion worked as an escort, was contacted by Port on 17 June 2014 pretending to be a client and offered £800 for his services; they later met at Barking station. On 19 June 2014,

Walgate was pronounced dead shortly before 8 am after Port himself anonymously called the emergency services reporting that a young boy was “collapsed or had had a seizure or was drunk” on the street outside his flat.

Evidence linking Port to Walgate’s death was missed at this time. Port was convicted of perverting the course of justice in March 2015 because his account of the death to the police varied. He was imprisoned for eight months, but released the following June and electronically tagged.

Between August 2014 and September 2015 Port murdered at least three more men: Gabriel Kovari, 22, who had moved to London from Slovakia and had briefly lived with Port; Daniel Whitworth, 21, from Gravesend in Kent, who worked as a chef; and Jack Taylor, 25, who lived with his parents in Dagenham, East London, and worked as a forklift truck driver.

The bodies of the last three of the four murder victims were found in the graveyard of the church of St Margaret of Antioch in Barking, two of which were found by the same woman walking her dog.

Port had planted a fake suicide note alongside the body of Whitworth that suggested he was responsible for the death of one of the other victims, Kovari, and that he had killed himself out of guilt.

The original inquests into the deaths returned open verdicts. Nadia Persaud, the coroner, however said she had “some concerns surrounding Daniel’s death which have not been answered by the police investigation”. Her statement continued: “most concerning are the findings by the pathologist of manual handling prior to his death” and noted that “the bed sheet that he was found wrapped in was not forensically analysed, and the bottle of GBL which was found near him was also not tested for fingerprints or DNA”. A detective was asked why the bed sheet had not been tested.

On 23 November 2016, Port was convicted of the assaults by penetration, rapes and murders of Anthony Walgate, Gabriel Kovari, Daniel Whitworth, and Jack Taylor, as well as the rapes of three other men he drugged, and ten counts of administering a substance with intent, and four sexual assaults. He was found guilty on all counts. In total, eleven men were victims of Port’s crimes.

“Over a period of three years the defendant committed a series of murders and serious sexual offences against young men. Port manipulated and controlled these men through the chilling and calculated use of the drug GHB, which he administered without their permission … This was a technically challenging case, complicated by a significant amount of evidence taken from the numerous social media sites Port used”.

A catalogue of police failings

The bodies of the four men were found in the vicinity of Port’s flat in just over a year from late Summer 2014: Walgate (the first) outside his front door and the other three in a nearby graveyard. The police, however, neglected to link the deaths. The first three victims were initially thought not to have died in suspicious circumstances, and despite the PinkNews website and the force’s LGBT independent advisory group correctly believing there was a serial murderer at large, the police had told them the crimes were not linked.

A BBC One documentary broadcast in March 2017 suggested a “catalogue of police failings” in the Met’s response to the deaths. Crucial witnesses were not questioned; for example, Port’s neighbour who had witnessed Port in a dazed state, with a large container full of white powder and bottles of clear liquid, when he made an unexpected visit to his home, and also reported receiving suspicious text messages from Port regarding Kovari.

Kovari’s previous roommate, John Pape, searched on the internet for other unexplained deaths in the Barking area, and was astonished at the similarities in the case of Anthony Walgate, especially the locations in which the bodies were found; however, Dagenham Police did not link the two cases. Upon learning of Whitworth’s death, he called the detective at Barking Dagenham Police and demanded to know whether they thought the now three cases were linked or could be murder, as he was concerned for his own personal safety; he was assured that they were not linked and not murder. He also offered to be interviewed since he felt he might have relevant information regarding Kovari’s last movements, but no one contacted him in response, even after he had organisations such as PinkNewscontact them on his behalf. The woman who found Kovari’s body and found Whitworth’s body two weeks later in the same location and almost exactly the same position, also reported thinking that Dagenham Police ‘had no idea what they were doing’ not to connect the two cases.

Whitworth’s step-mother says that when police informed her of his death, they led her to believe he had overdosed on drugs, despite no investigation having taken place, and discounted the bruising under his arms which a coroner later stated meant that third-party involvement could not be ruled out. They took the supposed suicide note left with his body at face value, sending a small fragment to her and Whitworth’s father, asking them to verify whether it was his handwriting. Although they said they were unsure, it was established at trial that Dagenham Police had recorded this as confirmation it was Whitworth’s handwriting, and that the police had not submitted the note for expert analysis.

When the couple were later shown the complete document, Whitworth’s father immediately commented that he saw nothing to indicate it had been written by his son. The couple had also asked whether the police had investigated who was meant by “the guy I was with last night”, and that the response was that it would never be possible to find out all the answers. Asking about challenging the open verdict or continuing the investigation, his stepmother encountered what she described as an attitude of “it is what it is, deal with it”.

Similarly, Taylor’s sister reported the police simply telling the family “Jack’s dead” and accepting the syringe in his pocket, white powder in his wallet and needle marks on his arm as indicating that he had sat down by himself and overdosed on drugs, although her brother was very anti-drugs. She and another sister contacted Barking Dagenham Police 11 days after his death for an update on their investigation and were astonished to discover none was taking place. They then researched for themselves and came across the three previous cases, but the police responded by denying there was any connection.

Eventually, two weeks after his death, the police agreed to take the two sisters to where Taylor’s body had been found, and at Barking Station, told them that CCTV footage of Taylor and another man had been found. The sisters were surprised not to have been notified, and more surprised to be told the police were not attempting to identify the other man. One described the attitude of the police as “shocking”. In response to their questioning the credibility of the police account of what the footage showed, a sergeant later contacted them to say that upon review, the footage did not show Taylor entering the churchyard alone. They then requested that images of the other man be made public in order to identify him; the police were reluctant, saying that they did not normally release CCTV images, but eventually gave in, and two days later Port was identified from the images and arrested.

Following Port’s conviction, the Independent Police Complaints Commission opened an investigation into whether 17 police officers should face disciplinary action. As of November 2017, this was expected to be completed in Spring 2018, but not made public until after a verdict in a new joint inquest on all four deaths; the inquests on Kovari and Whitworth have been quashed. The families have also opened a civil claim against the Metropolitan Police.

Serial rapist Milton Brown, 67, strikes again after his release from...