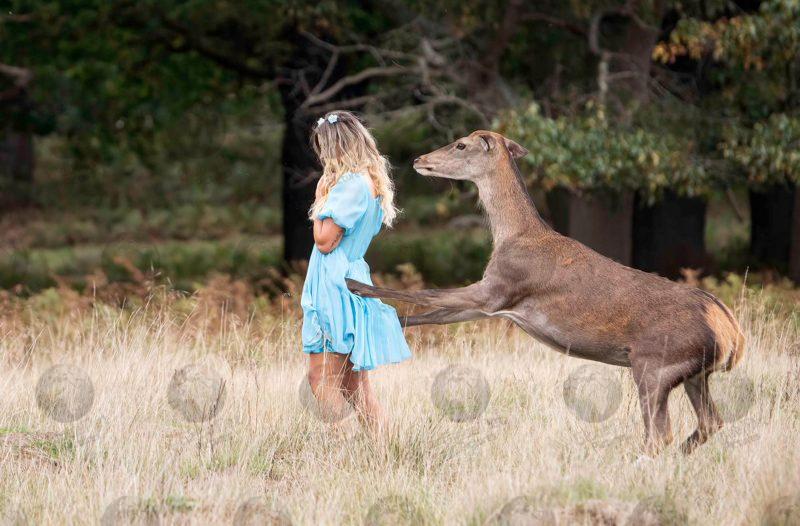 A young woman posing for an Instagram ‘selfie’ is attacked by a deer in Richmond Park after she tried to get too close to the wild animal during rutting season.

Royal Parks Police released this photo of the attack, warning people to keep their distance, posting it on their Twitter feed and stating: “This picture, taken on 11th October in #RichmondPark, demonstrates why you need to #Stay50mAway They are wild animals and can cause you injury #WeAreNotBambi.”
Keen to get a great ‘Instashot,’ the reckless blonde woman attempted to get much too close to the animal and paid the price as the deer raced towards her, stood up on hind legs and shoved her in the back with its two front hooves.
Wearing a summery light blue dress and with flowers in her hair she seemed oblivious to the deer’s objection to her intrusion, until it was too late.
Royal Parks Police want park visitors to realise that not all deer are cute like Disney’s Bambi and can cause serious injury if provoked, when you get too close or invade their personal space.
A local woman responded to the incident, criticising the women who was attacked, writing: “Anything for a good insta feed right. I bet she had a lot of likes so the bruises were worth it.”
Autumn is rutting/breeding season for the 1000 or so deer that live and roam-free in the Royal Parks of Richmond-upon-Thames.
Follow us on Facebook, Instagram, Twitter and Linkedin #globalnetpictures #GlobalNet_Pics #deerattack #Whambi #Instashot #Instagrammer #selfie #attack #RichmondPark #ruttingseason #breedingseason