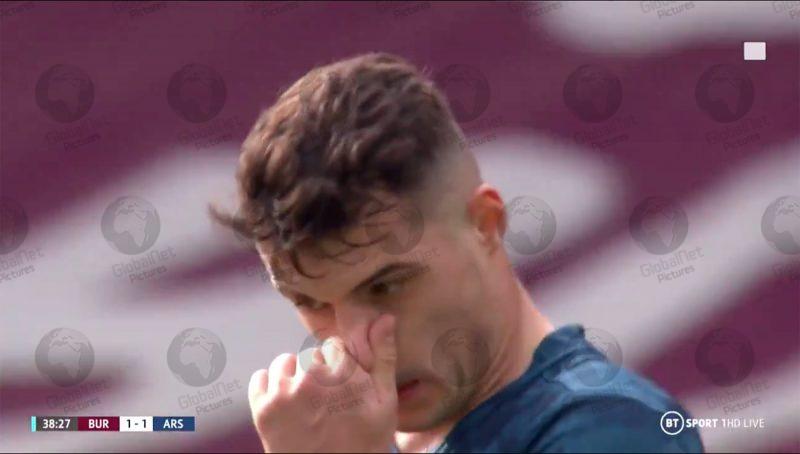 Granit Xhaka’s blunder turfed more misery on under pressure Arsenal manager Mikel Arteta after Aubameyang had put the gunners 1-0 up at Turf Moor today with a sweet and low drive into the bottom left hand corner of the Burnley net.

A poor pass in his own box by Xhaka took an unfortunate bounce off the midriff of Burnley defender Chris Wood and deviated goalbound into the net for an equaliser. 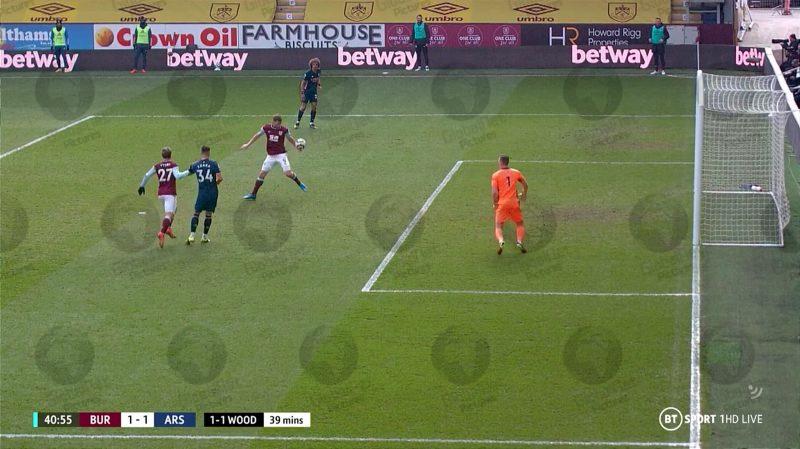 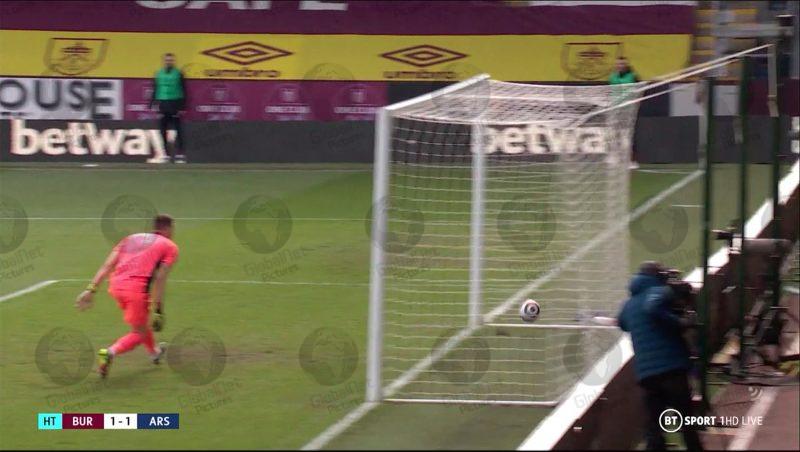 …and into the net 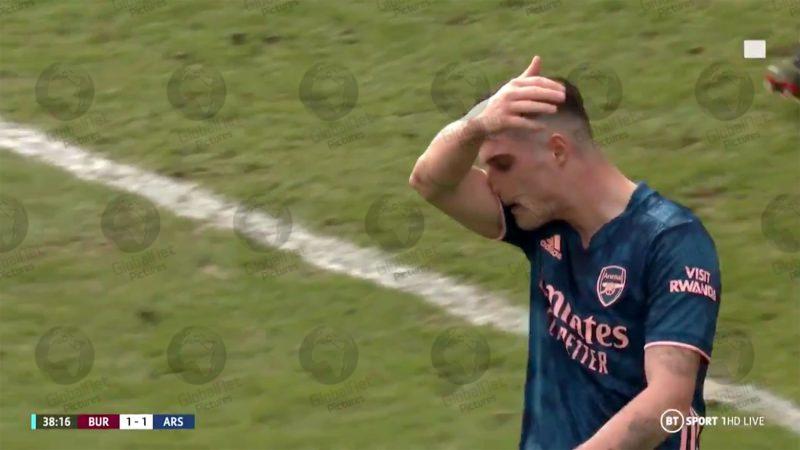 Arsenal faded in the second half after a promising start in the lunchtime premier league kick-off, which was televised live on BT Sport 1, before rallying late on where they were unlucky, striking the post and the bar.

They then had one penalty shout turned down by VAR when Nicholas Pepe flicked the ball up in the area and it struck the outstretched arm of Burnley defender Erik Pieters. 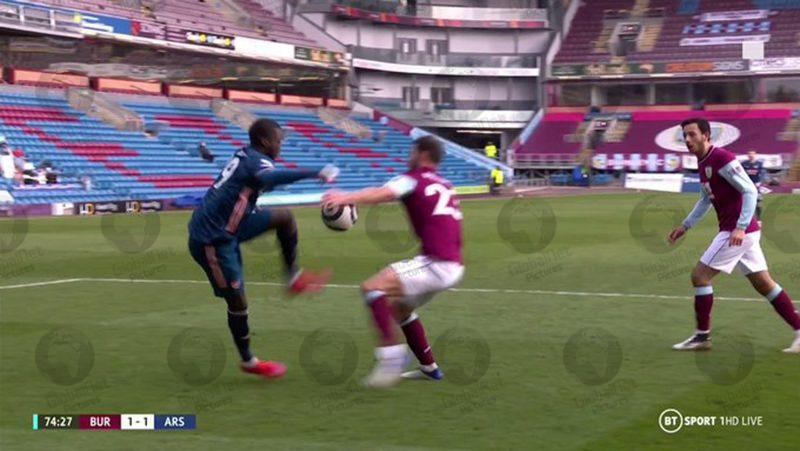 Although an accidental handball, Pieters arm was in an unnatural position outstretched, even though he didn’t mean to handle it. Under the current rules it should still have been a penalty because the new rules ruling out accidental handball that does not prevent a goal will not be implemented until the summer. However VAR looked at it and inexplicably didn’t give it.

Former Premier League referee Peter Walton was consulted in the studio and said he didn’t understand why it wasn’t given. Arsenal will justifiably feel hard done by. 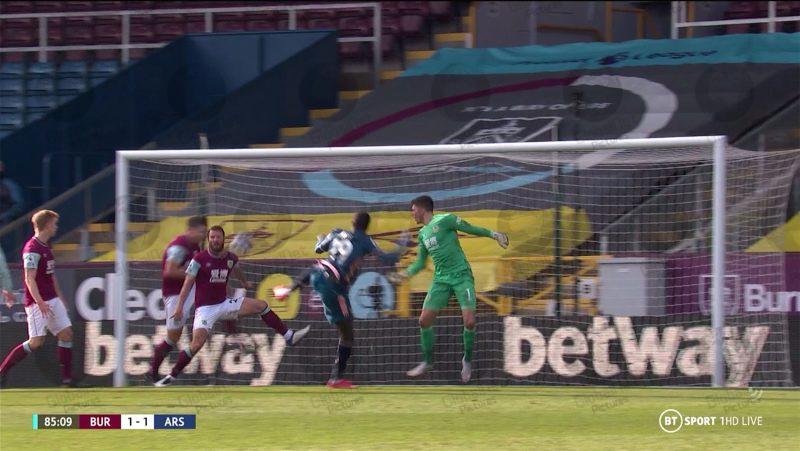 Eric Pieters and Pepe were involved yet again in another penalty claim for Arsenal which was given this time and Pieters was shown the red card when Pepe’s goal bound shot appeared to hit Pieters on the arm on the line. This time VAR got the decision right and the red card was rescinded when replays clearly showed the ball struck the top of the defender’s shoulder and not the arm. 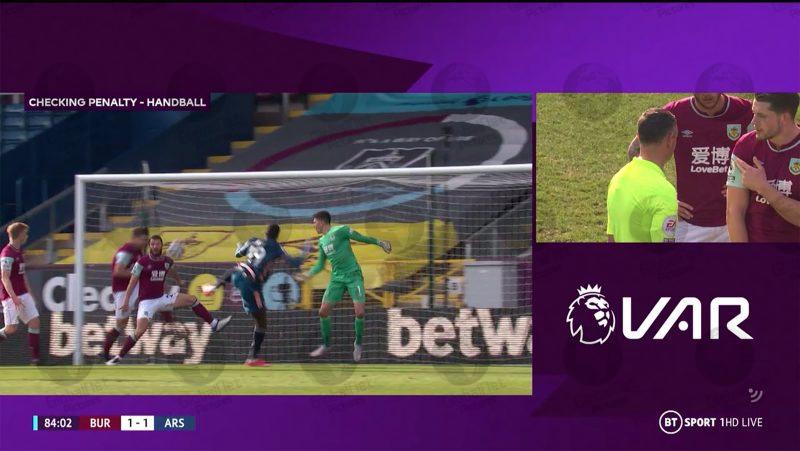 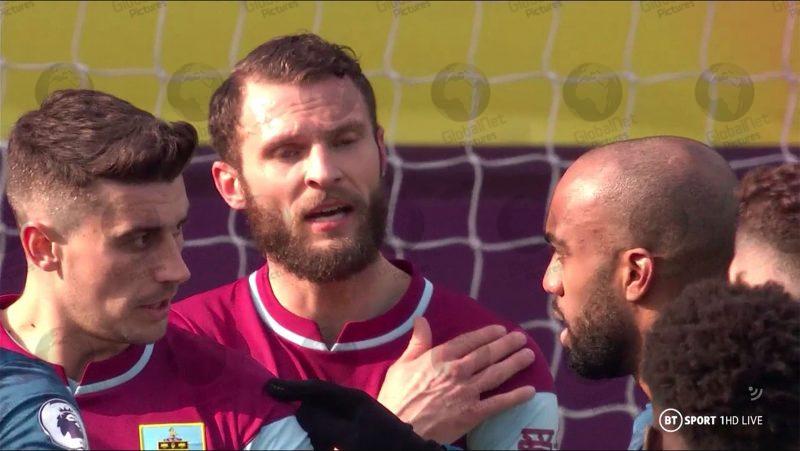 After the game Burnley manager Sean Dyche told BBC Sport:  “We had to work very hard against a decent Arsenal side but the mentality of the players was outstanding. It is a third game in a week and the physical side of the game was tremendous.”

Chris Wood will never score an easier goal in his life! pic.twitter.com/h4jYPBebWN

"I thought they were outstanding the way they kept going after Arsenal."

"That's what VAR's for, it's for those exact moments."

Sean Dyche speaks to @TheDesKelly after his side earned a big point against the Gunners. pic.twitter.com/KqnZ72SCU0

Arsenal boss Mikel Arteta told BBC Match of the Day: “If you don’t score your big chances, if you give a goal to the opponent and you don’t’ get the referee’s decision when you need to it is very complicated in the Premier League to win a lot of games.”

Regarding the initial penalty shout, he said: “If the first one is not a penalty honestly someone has to come to the training ground and explain what a handball is. It cannot be any clearer.

“We hit the bar and the post, they cleared the ball off the line but they defend those situations well but it is down to us not getting the three points. The top teams sustain results and level through 10 months in this competition and you have to come here and win the game comfortably in my opinion.

"We should have won by two or three."

"It was an obvious penalty, or else someone needs to explain to me what a penalty is."

No whacks Djokovic – US Open closed for ball bashing Serb