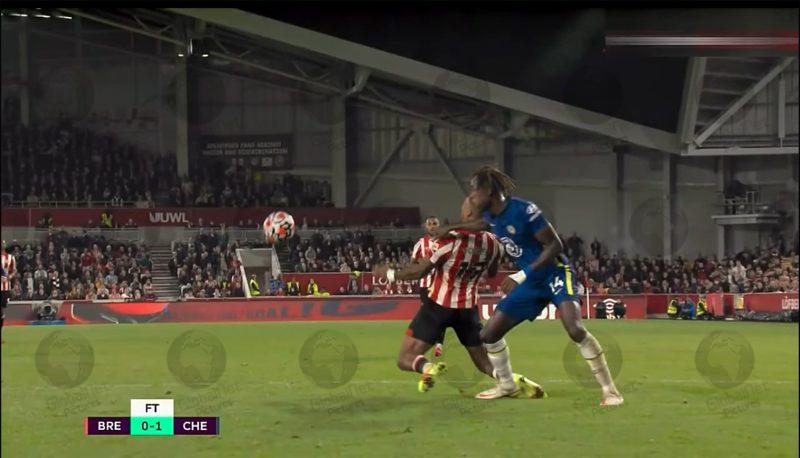 Brentford were denied a penalty against Chelsea yesterday when the linesman wrongly flagged Ivan Toney as being in an offside position before he was brought down by Trevoh Chalobah in the box.
The Bees deserved more than to narrowly lose 1-0 as they hit the post twice and bombarded Chelsea with wave after wave of attacks in an attempt to get something out of the game.
A superb man-of-the-match performance by Chelsea stopper Edouard Mendy, who also got lucky on a couple of occasions, was the main reason Brentford couldn’t score, but Brentford should have been awarded a penalty.
Trevoh Chalobah put his arm across Ivan Toney after the ball was played across to him and brought him down in the penalty box. 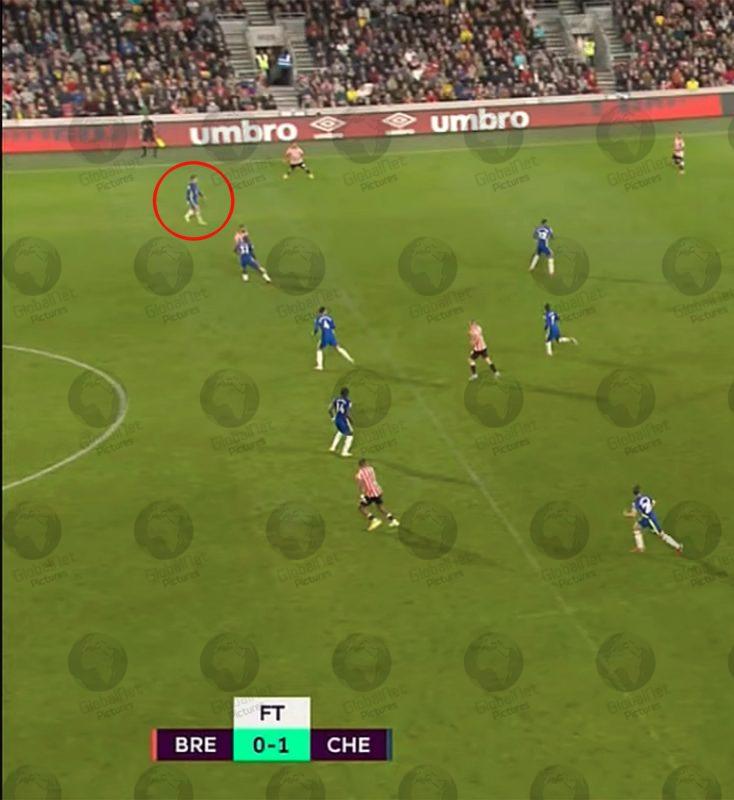 The one and only replay shown of the incident on Sky Sport’s live coverage of the evening kick-off showed Ben Chilwell clearly playing Toney onside, but the linesman flagged for offside, so the referee couldn’t make a decision whether a penalty should be awarded. VAR then didn’t indicate that the offside decision was wrong and there was no review or repeat viewing on the live Sky Sports broadcast of the offside incident. It was also not even looked at again on MOTD last night or analysed or probed and discussed after the game during Sky Sports coverage. 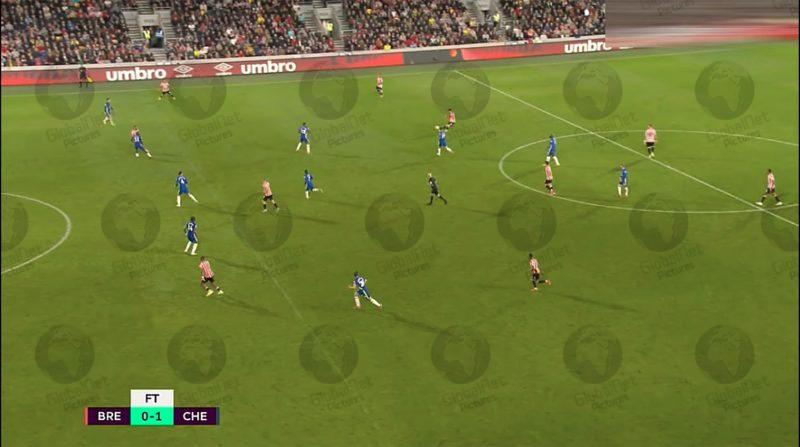 The lack of TV analysis of this incident suggests ‘big club bias’ again where the big teams get the benefit of major decisions in key moments to the detriment of the little clubs – in this case Brentford.
However footage was posted on Youtube after the match from a different broadcaster of the game where pundits Andy Townsend and Steve McManaman and former Premier League referee Dermot Gallagher did question and analyse the incident.

Dermot Gallagher said the replay and freeze frame show Toney was “not offside.” 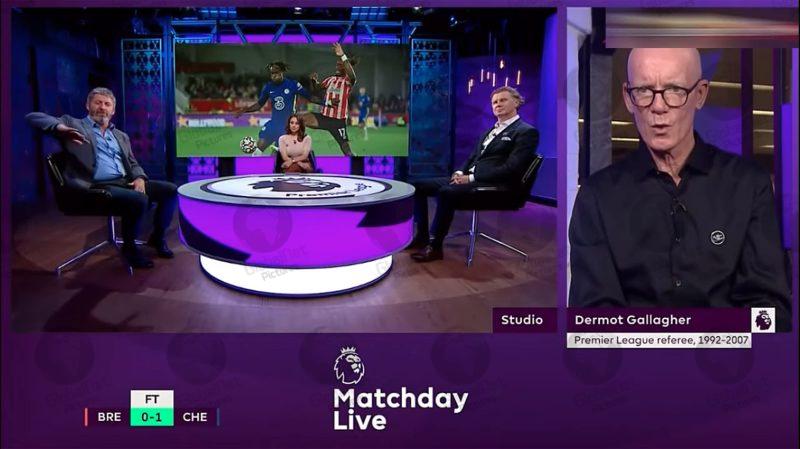 Dermot tells Andy Townsend: “The assistant has actually flagged offside. When you see it again, it’s not offside…so the referee doesn’t make a penalty decision. At that point the VAR can step in and say ‘do I think the referee’s made a clear and obvious error.’
“Well in line with the tolerance level they have set this year, saying the referee has to have made a clear and obvious error. I think Chalobah takes a big risk putting his arm up there. When you look at it, it’s not the worst of contact. He does catch him but he goes down
very easily. He doesn’t catch him in the face, he catches him on the shoulder, I think.”
Andy Townsend then asked Dermot: “Was he offside…have you and the guys had a look at that?
Dermot tells Andy: “Yes, he’s not offside. If that flag does not go up then we revert back to the referee’s decision what he would have done on the field.”
Andy says: “Shouldn’t we be looking at that Derm as a matter of fact that he’s not offside, therefore that should be a penalty?
Fellow pundit Steve McManaman then chipped in: “If he doesn’t give offside there Derm and that is just normal play, do you think Anthony Taylor gives the penalty?”
Dermot states: “This is where the dilemma comes in because we are second guessing what the referee would give. What I would say is if the flag hadn’t gone up we then go a totally different phase of play.”

Watch the footage and discussion here…

The wrong offside call was not missed by eagle-eyed viewers either, who briefly saw the one and only replay shown on Sky, the incident not being shown at all on Match of the Day. 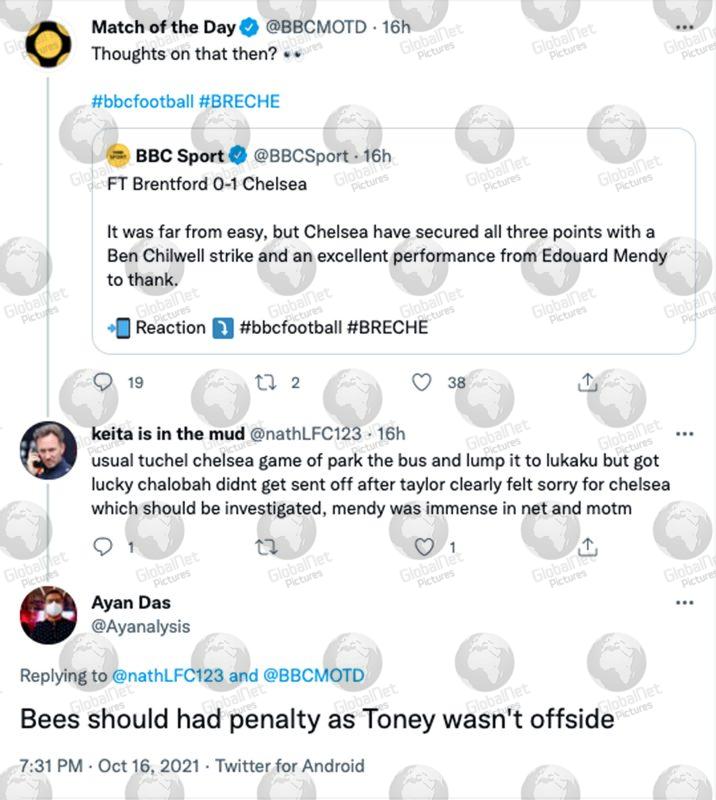 Ayan Das @Ayanalysis tweeted in response to Match of the Day on twitter asking for thoughts about the game: “Bees should had penalty as Toney wasn’t offside.”

Media can create an account and login to download the images available on this story    which will be then listed below.

Trainee chef Andy Banks, 28, has been charged over peeing by...